The Doge of Venice Ludovico Manin recommended: “Prawns and Scallops on a bed of rocket with a dressing of lemon, oil, salt and pepper.”

The “Antico Pignolo” Restaurant opened in 1930. Its site, however, actually dates back to 1200 when it was used as a blacksmith’s forge which looked after the Doge’s horses.

From 1600 to 1700 it was used as a bakery for the nuns whose convent occupied the main building and the west wing.

Afterwards, it became a green-grocer’s shop which sold pine nuts and other spices coming from the luxurious Asian markets, brought along the legendary silk roads where Venice had extended its empire.

Over the course of this century, “Antico Pignolo” was transformed into a prestigious restaurant with an important clientele, and was even immortalized in the well-known film “Summertime”, starring Katherine Hepburn, and filmed in its dining rooms.

The highlight of the restaurant is its notable wine cellar containing more than 900 labels of superb, selected wines at world-class level. The cellar has gained international recognition, not the least of which is the “Best of Award of Excellence” conferred by Wine Spectator.

The new ownership took on the Restaurant 30 years ago. It was brought to its present culinary level with great mastery, particular attention being paid to typical Venetian and international cuisine.

Great merit goes to the owner of the Restaurant who is a passionate expert in choosing the wines that go on his list.

High quality Banquet Service is another of the Restaurant’s specialties. “Antico Pignolo” Restaurant uses all the art, skill and talent necessary to create dishes of exceptional quality and guarantee outstanding private and cultural events at the most famous and prestigious palaces in Venice. 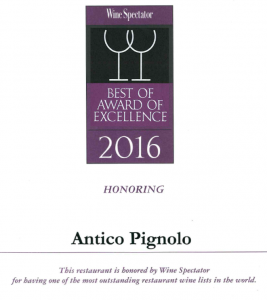